As part of a new program launched in August 2022, Wanneroo Business Association (WBA) donated $500 to No Limits Perth as this month’s Community in the Spotlight. 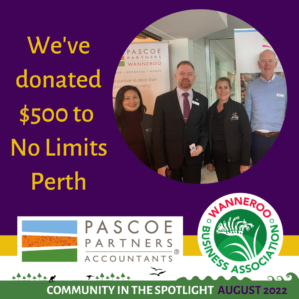 Announced at WBA’s 2022 AGM in July, the new Community in the Spotlight program adds a twist on the existing Business in the Spotlight package, allowing the month’s sponsor to choose a community group, club or charity to support as part of their campaign.  In addition to the donation, the program seeks to bridge the gap between charities, clubs, community groups and local businesses, to increase support and awareness.

Chosen by Pascoe Partners Accountants, the Business in the Spotlight for August, No Limits Perth believe that by helping the less fortunate, victims of domestic violence, vulnerable families and children, the elderly, those affected by fire, new comers & those just doing it tough, they can make the difference. They provide essential items such as food hampers, pre-loved furniture, toiletries & other basic essentials to those in need.

The August campaign involved two Coffee Catch Ups, including a behind the scenes tour of No Limits Perth’s HQ in Wangara, a Breakfast event with CEO Joondalup Health Campus and  Pizza and Pint Night Sundowner. 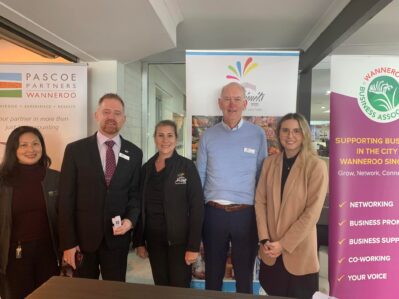 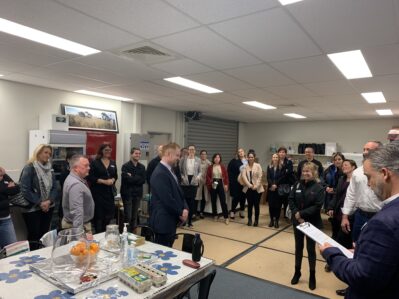 Wanneroo Business Association’s General Manager, Lauren Bell, commented that ‘many local clubs, community groups and not for profits struggle to promote themselves due to lack of budget or resources, with many running on the time donated by volunteers.  This initiative not only seeks to address this, but it will give the organisations a platform to raise awareness of their services, seek advice or support, generate interest for volunteers or Committee Members and drive sponsorships.’

Pascoe Partners Accountants was established over 40 years ago with a vision to work proactively with clients to offer the very best in advice and results.