Read about how a Joondalup based business used an incubator operated by Business Station to thrive. 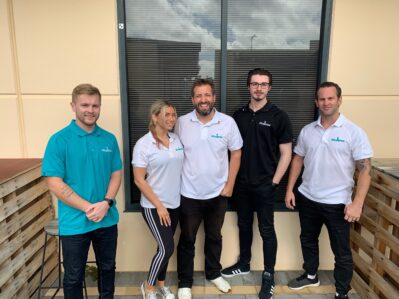 Founded in 2015, AGuyIKnow is a Perth based business creating online learning content and explainer videos for businesses of all sizes, owned by Graham.

“We do four things. The first is explainer videos and online learning. The second thing is a package – it’s a program of work, this is an interactive eLearning simulation. The third thing is consulting and the final one is a new part of the business that we set up. It’s about managed learning for small to medium businesses who wouldn’t necessarily have a learning team. They normally might have one learning person, if at all, who knows how to do things one way. It could be a small company that’s got five staff who just go – I need to do an induction. I need to have some sort of learning management system.”

The business name came from the phrase “there’s a guy I know who can help you.” Graham says, “I was a want-to-preneur. Still am. I have to work, I can’t choose to work. I run an energy monitoring business at the same time as having that core job. I was also doing other things, just trying to bring in money.”

After four years of working alone Graham wanted to scale his business, so he hired an offshore team member in the Philippines. “I thought how do I get someone to do what I can do? I went out to Start.com, which is like an Upwork. I found about five people and got them all to do the same task. I was spending money that I didn’t have – god bless credit cards. Some of them did okay. One of the guys in the Philippines needed some training, but he was the most reactive and took my feedback. He understood it’s a collaboration. I got rid of all the others and just went with him.”

Graham’s first employee was able to recommend other people in the Philippine’s to build the team. When he had 40 offshore employees but was still working seven days a week with long hours, he knew it wasn’t a sustainable solution. “I literally got to a point where I was hurting the business. I was delivering late to the clients. I did that for about two years, but it was just hell.”

He realised he needed to employ someone locally alongside his offshore team, which meant he would need an office space. He started out with a small office at the Edith Cowan University Business and Innovation Centre (ECUBIC), Business Station’s Joondalup incubator. “The change was coming to Business Station when I needed to employ someone, and that has allowed the business to go to that next level.”

When COVID happened, a bigger office became available. With his first junior Sarah, his daughter Kiera joining the team and looking to hire another local employee, Graham took the leap and moved. “It was literally double the rent. Shall I? Shan’t I? We’ve got room to grow, but money’s not great. And we did it. Best decision we’ve made. One of the great things about this place is it’s affordable rent and it’s low risk. I only need to give a month’s notice and I can move back to the smaller office.” Graham’s team has since grown to include five local employees.

Reflecting on advice for other small business owners looking to move forward and take their business to the next level, Graham says “My advice is there’s plenty of problems out there, just go for it. Don’t expect it to be right the first time because it never is. I chatted to someone before this part of the business had grown. I was telling them about what I was doing, and they said, “My God, you’ve done so well Graham.” But you fail your way to success. It’s exactly that.”

Business Station has incubators in Joondalup, Wanneroo and Gosnells. Learn more about them here.