Wanneroo Business Association (WBA) recently had the privilege of hosting the Hon. Mark McGowan MLA, Premier and Treasurer of Western Australia, as keynote speaker for a Business Breakfast, after being contacted by the Premier’s office earlier this year.

As part of WBA’s quarterly Business Breakfast series, the event was held in partnership with the City of Wanneroo, and welcomed over 180 attendees including State Member for Wanneroo Sabine Winton MLA, State Member for Burns Beach Mark Folkard MLA and newly elected Federal Member for Pearce Tracey Roberts MP, alongside City of Wanneroo Councillors and business owners.  The Premier provided an update on the WA economy and future outlook, and then engaged in a Q&A session with event MC, Tina Altieri.  We’re written up a quick summary of the points discussed, and the answers to the questions below. 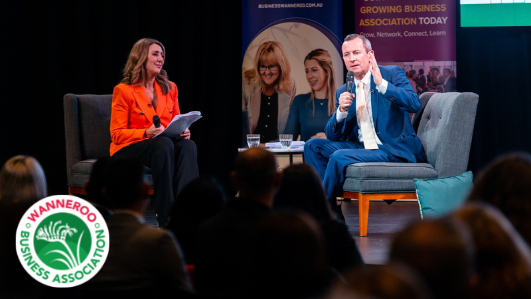 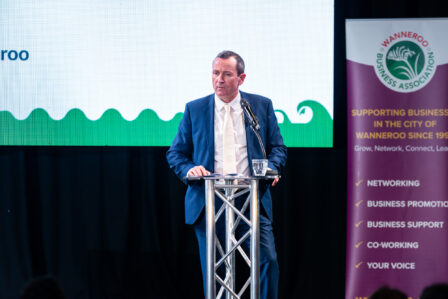 Remembering Wanneroo as once being the Northern tip of Perth, and noting the remarkable change and development of the City alongside the varied cultures that contribute to our region, the Premier began by acknowledging the pressure business owners face, having lived, breathed and ran the family business started by his father as he grew up.  In summary, the Premier’s address to attendees at the Business Breakfast, is broken down as follows:

The Premier shared the threat he was briefed on at the start of the COVID-19 pandemic, when experts predicted deaths in the 100,000’s, a great depression, and a projected unemployment rate of between 20-30%.  In summary of the State Government’s response to the pandemic, Mr McGowan explained that border closures and vaccine mandates were required to crush the virus, resulting in 12 days of lockdown in WA, compared to 153 days in Sydney and 285 in Melbourne.

Current State of the WA Economy

WA’s domestic economy has grown by 8.8% since the start of the pandemic two years, with annual retail turnover up 22%, primarily due to strong household spending.  WA has boomed, WA exports have boomed, and WA’s unemployment rate sits at 3.1%, the lowest in the nation.  More than 1.47 million Western Australian’s are now employed, which is more than any time in our history, along with the highest ever levels of full-time employment and women in the workforce.

The Premier continued by addressing the challenges we now face, which are not unique to the WA economy.  Rising inflation and interest rates, supply chain pressures, tight labour markets and global volatility following the pandemic and the invasion of Ukraine, provide many challenges.  In response, Mr McGowan explained the importance of having a strong budget and managing WA’s finances, to stay in a surplus and pay down debt.  The budget is projected to remain in surplus over the forward estimates period, including a $1.6bn surplus in 2022-23, and net debt is expected to fall below $30bn this financial year, the lowest level of debt since 2015, keeping WA in good position moving forward.

The Premier explained that good financial management pays dividends, WA is now able to make record investments in infrastructure, health, climate change and economic diversification, without borrowing money.  $1.3bn is being allocated to diversification initiatives and essential economic opportunities for growth such as manufacturing, tourism, international education, the battery and defence industries and renewables.

Investment in the City of Wanneroo and Perth’s northern suburbs was also addressed by Mr McGowan, with special mention to the Yanchep Rail extension project, the Mitchell Freeway extension to Romeo Rd, the widening from Hodges Dr to Hepburn Ave, and the smart freeway technology being implemented between Joondalup and the CBD.  $256.7m has been allocated to a major redevelopment and expansion of Joondalup Health Campus and $126.5m to the development of Ocean Reef Marina.

The Premier was not shy in addressing the serious skills shortage currently affecting WA businesses.  Describing the current recruitment challenges as ‘debilitating’, Mr McGowan explained that the WA Government are raising visa delays with National Cabinet, rolling out a ‘Build a Better Life in WA’ campaign to attract interstate and international skilled workers to our State, and advocating for changes to the skilled migration occupation list.

To expand on specific matters related to local business, Wanneroo Business Association requested questions from attendees, which were put to the Premier in a 35-minute dynamic Q&A session facilitated by event host, Channel 7’s, Tina Altieri. 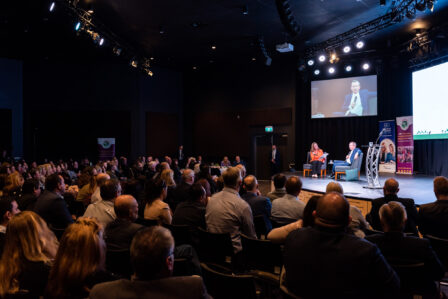 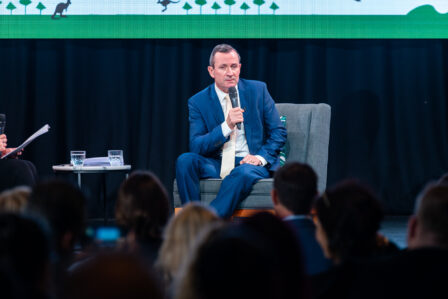 What is the main challenge facing WA over the next 4 years?

The Premier’s response was that Covid-19 is no longer a threat and that the State is doing well.  Trading relationships are always important to manage, just like many businesses, managing relationships is key.  WA currently sells $120bn per year to China and we buy $6bn from them, so that’s an extremely important relationship for WA to continue.

What issues are key to address for WA with the newly elected Albanese Government?

The Premier was quick to reiterate the support from the Federal Government in encouraging skilled workers to move to Australia, and WA.  Mr McGowan added that making sure WA’s election promises are delivered and improving the health system with Federal Government support is also important.  Commenting that Eastern State health systems have fared worse, the Premier explained that the WA health system also faces staffing issues, too many people presenting at A&E that shouldn’t be there, and elderly people clogging beds that should be in the aged care system.

Sole traders just under the GST threshold often miss out on Government support.  Suzie Jackson from Sweethearts Chocolates, Bouquets & Gifts asked the Premier if the State Government could be doing more to support small business?

Mr McGowan encouraged small businesses to use the services offered through the Small Business Development Corporation, but added that the tax system cannot be changed.  The Premier explained that planning laws could be made easier to navigate, and is something that is currently being looked at, but generally State Government supports small businesses by ensuring the State has a buoyant economy so residents can spend more with them.

Katherine Ranga, owner of H.E.A.R.T.T asked if and how the WA Government intends to persuade businesses to adopt Labor’s climate change ideal?

The Premier explained that the WA State Government will be one of the first to phase out coal by 2029 due to the availability of solar and wind.  Mr McGowan explained that the WA electricity grid links Augusta, Kalgoorlie and Kalbarri, with the grid powered by Collie Solar Park and gas generation.  The switch to phase out coal will need to be carefully managed to avoid blackouts, but moving forward there will be a focus on hydro and battery.  Mr McGowan did not outline any plans for tax breaks or incentives to encourage businesses to tackle climate change.

The most popular question received was on the topic of mental health.  Is the WA State Government looking to assist with mental health support funding or services specific to business owners?

In response, Mr McGowan informed attendees that the State budget includes more funding for mental health services but acknowledged that the demand is huge.  Services are currently available, but the demand outweighs supply.

After thanking Priscilla for the question, Mr McGowan shared that after 25 years in Parliament, and as a Councillor before that, he has no specific strategies in place.  The Premier added that resilience comes from built up experience in dealing with ongoing opinions and criticism.

The final question was for the Premier to reveal what advice he would give to his younger self?

Mr McGowan shared that quite simply, he would tell his 20-year-old self not to be so hard on himself.  The Premier opened up to share that he regrets never embarking on a Contiki tour!

City of Wanneroo Deputy Mayor Brett Treby also announced the City’s new brand – Business Wanneroo, via video at the Business Breakfast.  Watch the announcement and find out more about the business support available in the City of Wanneroo in the below video, or visit businesswanneroo.com.au

What can Perth businesses learn from the Queen?